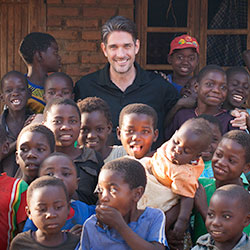 Steve Cook is a software engineer and human rights activist. In 2006, Steve was reading an email and saw something in the sidebar that caught his attention: There are 27 million slaves in the world today. He clicked on the link and read an article about the crisis of human trafficking in the world. Steve was then faced with a decision. He could close the article, go about his normal everyday life, and pretend he didn’t know anything about this, or choose to act on this knowledge and do something about it. He chose the latter and has never been the same. Thus began his new life of human rights activism and a fight against global poverty and injustice.

Steve founded Equitas (Latin for Justice) in October 2007, and organized a rally in Uptown Charlotte called Charlotte Torch Rally, which was an event geared toward raising public awareness of the genocide in Darfur, Sudan. Money was raised for medicine and clean water for refugees in Darfur, as well as for a scholarship fund for Sudanese refugees that have resettled in Charlotte. Equitas has expanded its efforts to include Malawi, the poorest country in the world.

Malawi is a country of 16 million people and has more than one million orphans. Steve visited Malawi for the first time in 2008 to determine the most effective way we can help break the cycle of poverty. He met with village chiefs, elders, pastors, missionaries, teachers, and community volunteers. After several discussions, it became apparent that the boys and girls there would benefit most from education. Equitas is committed to investing in the lives of orphans and vulnerable children by providing opportunity through education.

Thank you for subscribing!

You'll receive an email soon, and you'll need to confirm your subscription. We look forward to keeping you updated on our projects in Malawi.